It’s not surprising when architects specify radiant heating and cooling in a renovation or new construction. It is however, quite an affirmation of the radiant concept when the firm specifies it for their own building. And even more impressive when that firm is one of the first integrated architectural firms in the nation and an award-winning leader and adopter of LEED planning and construction. 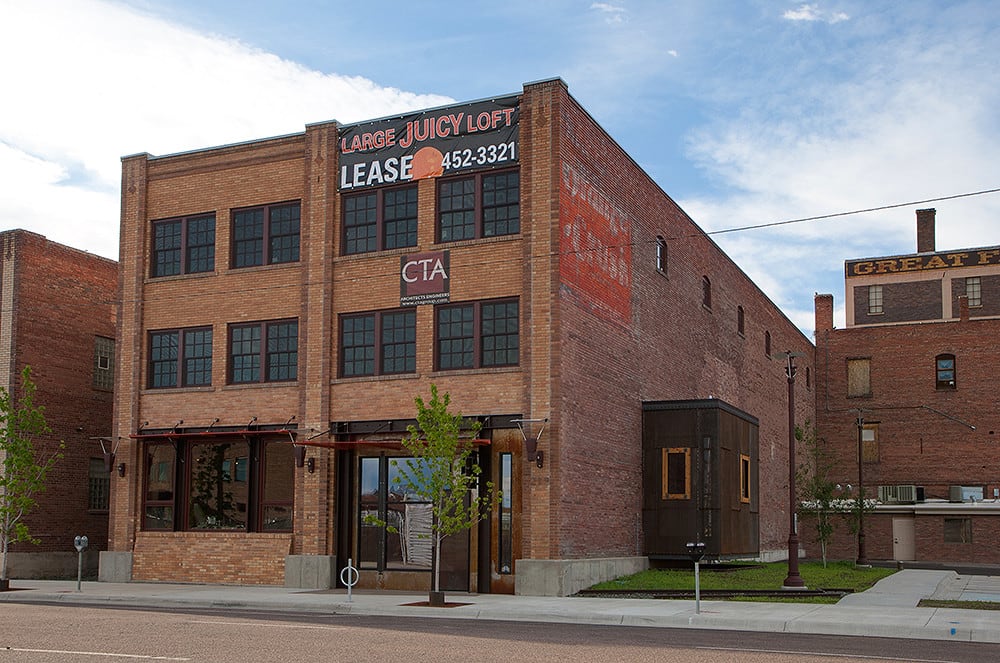 For their new regional office in Great Falls, Montana, CTA Architects and Engineers planned an extensive renovation to an old Orange Crush soda factory and office. Constructed in 1917, the classic ware- house style, 3-story brick and wood beam building was architecturally non-descript – typical of the era, a shotgun structure with a receding rooftop and a flat street front.

One might ask why an innovative firm like CTA picked such a building, but they chose it precisely because of its lack of specific visual architectural character. According to Tony Houtz, lead architect on the project, the building “certainly had redeeming qualities, but they were subtle and hidden. This building had been viewed by numerous developers and property owners and was repeatedly passed up. But the reality is that these buildings are all worth saving and can produce dynamic, intriguing spaces if they are carefully repurposed.”

Key to the renovation would be identifying and utilizing technologies that would bring the building from it’s historical past to a green present without affecting the qualities that make it beautiful and unique.

They would rely on geothermal technology to heat and cool with the Warmboard radiant product only requiring a back-up boiler for emergency heat, which is rarely needed. The primary heat source is the Madison Aquifer which maintains a constant 55 degree water temperature. Heat pumps are then used to pull energy from the water to heat the building. In addition to this system, code requires ventilated air in the building so solar ductwork on the roof is utilized to capture the heat of the sun and preheat the fresh air intake. This results in a net gain of 20-25 degrees, and a large reduction in energy use.

The aquifer also serves as the cooling source by cycling the cool water through the Warmboard tubes. On warmer days and in the few locations where solar gain contributes to increased load on the system, CTA has auxiliary cooling in place, as well as computerized monitoring to control condensation. 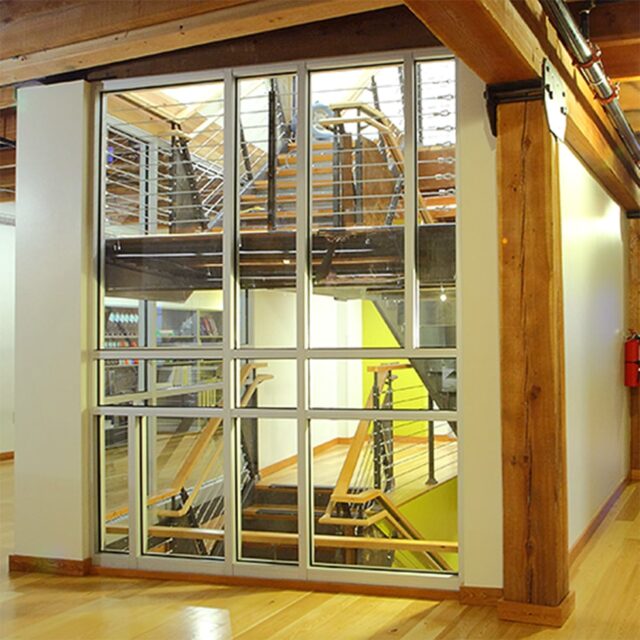 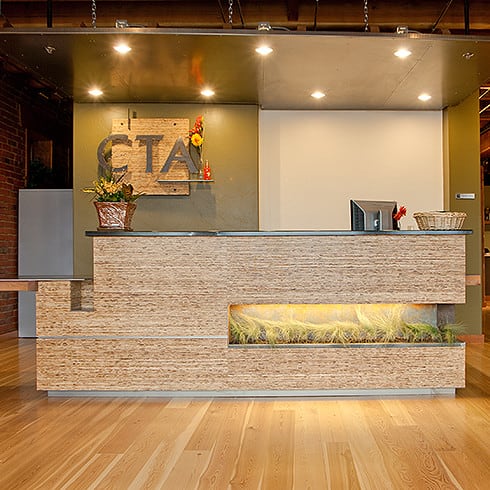 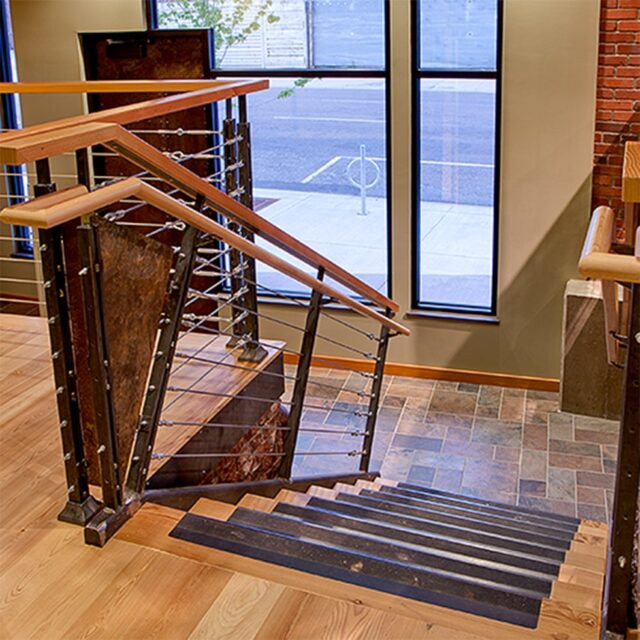 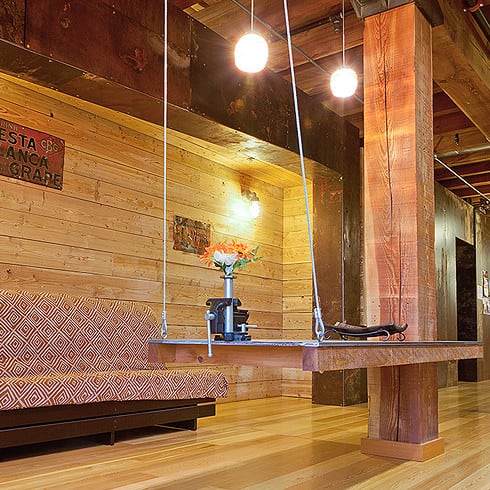 Founded in 1938 in Billings, Montana as Cushing & Terrell, CTA Architects Engineers now has 16 offices in six states, serving clients across a wide swath of the United States. Their philosophies of integration naturally dovetailed them into early adopters and leaders in LEED and other green initiatives and many of their structures and renovations are nothing short of spectacular.

“This building, though derelict and in disrepair, had value – both to the urban fabric of the downtown community, and to potential users,” said Tony Houtz. “By investing in the structure and making a commitment to breathing new life into a building from another era, we participate in realizing and sharing this value.”

CTA was determined to create a dynamic out-flowing, open air space without jeopardizing the attributes that gave the building its unique character, particularly inside the space. One of the goals was to leave as many structures exposed and eliminate intrusive, unnecessary structural additions. Given the building’s age and other issues a lot of thought, and, the right technologies, were deployed to minimize and negate those issues.

CTA was impressed with the efficiency of the Warmboard product as well as the accuracy of the original quote which kept the project in budget. In the end, there were 13 different heating zones. Both the architects and the contractors touted Warmboard’s radiant responsiveness, perfect for the Montana climate.

“The space performs well – the heating is even and controllable for each of the individual zones throughout the building,” commented Tony. “We have a two-story space at the main entry with a forced air system, that area would be drafty and inefficient to heat and cool, but with a radiant system, that area stays comfortable without an increase in energy usage.”

“We love working within the constructs of existing buildings, especially those that have a rich history from the early part of the century,” Tony added. “There are literally thousands of buildings like this one, that aren’t immediately recognized as architecturally important or spatially interesting, and all of these buildings have potential to become landmark structures.”

Added to this landmark structure, and not originally specified, was a 3-foot cut out in the hardwood flooring where Plexiglas was used instead to show off the unique Warmboard radiant installation. – Tony Houtz 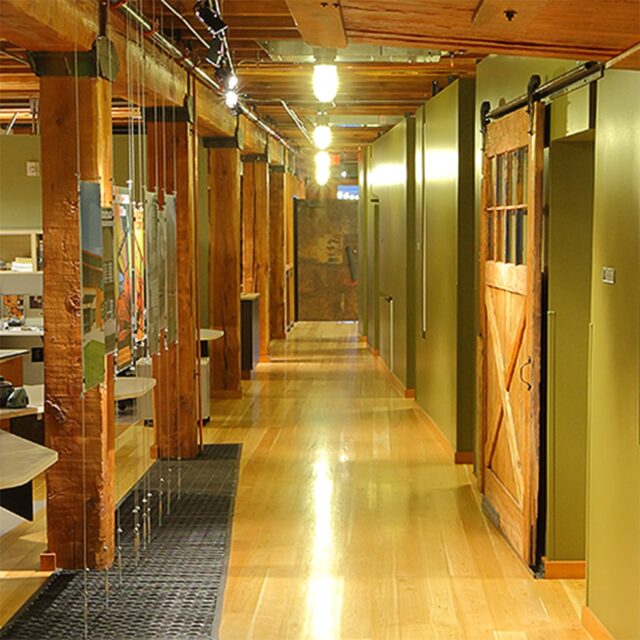 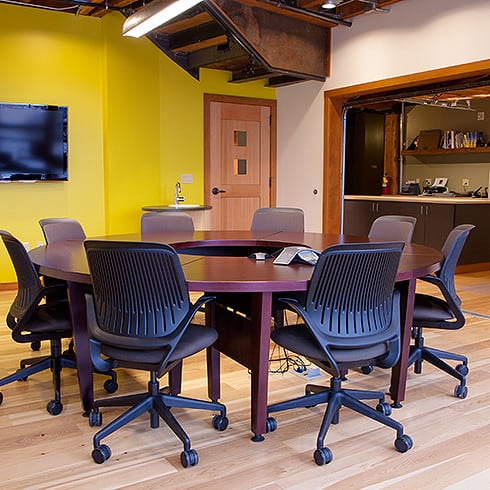 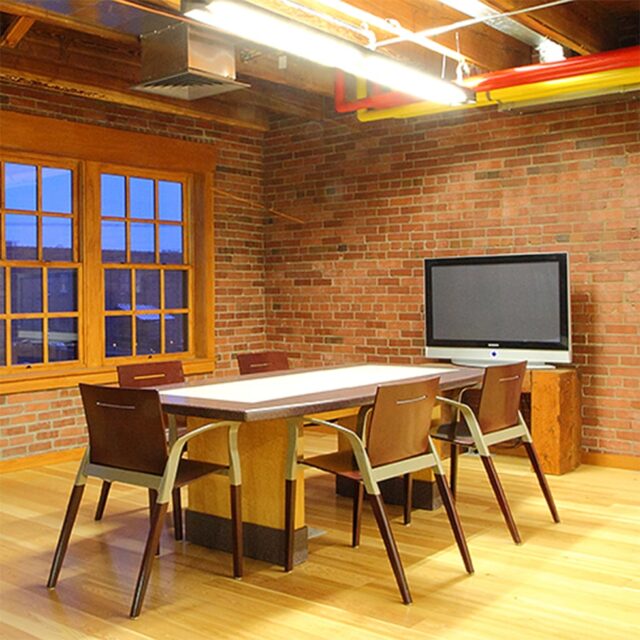 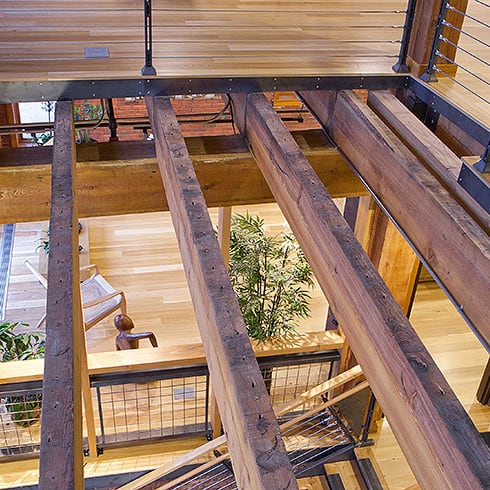 As a frequent contractor for CTA, Mike Tabacco understands the firm’s design/ build objectives and has the ability to find products that meet their often stringent and certainly unique application requirements. Mike has installed radiant heating systems numerous times, but the Orange Crush building presented a set of structural and design obstacles that made traditional systems problematic.

“To say that specifying radiant heat in the Orange Crush building presented some challenges was, well, an accurate assessment,” recalled Mike. “We needed a product that adhered to CTA’s insistence that the architectural integrity of the building wouldn’t be compromised but we also had to get around some tough structural problems.”

Indeed, the existing flooring in the building was uneven as was the foundation itself. Installation of a traditional poured radiant system would add layering and weight which couldn’t be supported without additional structural support, which would then compromise CTA’s mandates regarding not compromising the architectural style. Also a layered installation would take much longer and the large amount of water needed would cause unwanted moisture, detrimental to the old wood in the building.

Warmboard proved to be the perfect solution on all fronts. “It was very easy to work with, user friendly, lightweight and since it also served as the subfloor it made the final flooring installation fast and easy,” Mike added. “You have to consider that a layered radiant system would have cost us as much as 8 inches, not to mention the weight. Warmboard was an inch and an eighth.”

As a subfloor Warmboard performed equally well under the three types of primary flooring installed throughout the space –tongue-and-groove fir, tile on backer board in the restrooms and main entryway and rubberized epoxy flooring in the janitor’s closets. – Mike Tabacco 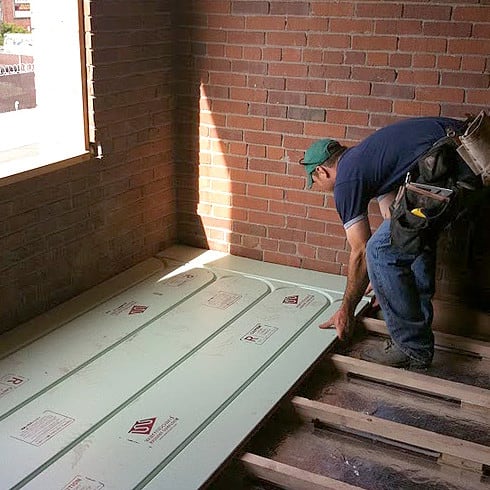 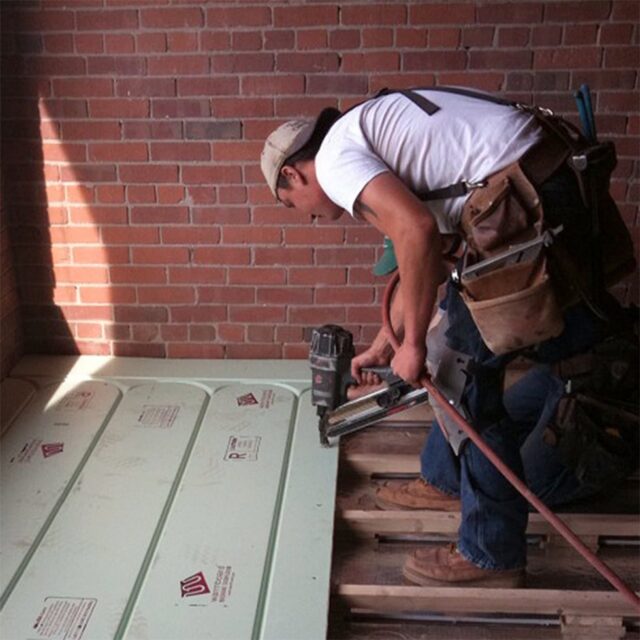 I originally invented Warmboard with new construction in mind. However, the first Warmboard project, my home, was an addition/remodel, with a portion of it becoming my architectural office. 23 million square feet later, we find that roughly 30% of our panels have been installed in remodel/retrofit applications. So it is appropriate that this issue features the renovation of the nondescript Orange Crush soda factory to become the stunning home of CTA Architects. This project demonstrates Warmboard’s versatility in the context of a commercial building retrofitted with radiant.

We have done numerous large-scale renovations of this type, including Brown- stones in New York, an industrial building in Wisconsin, a sash mill in Oregon. This project went further, pushing the envelope with some innovative state of the art energy efficiency technologies such as a geothermal heat pump system combined with radiant cooling.

Existing buildings rarely have the structure to support the fifteen or more pounds per foot of added dead load from a heavy radiant slab. Slabs usually add over an inch and a half in floor height, which can cause any number of challenges throughout the process. Often times, older buildings have settled causing uneven or unlevel floors. Although it’s assumed that a gypsum concrete pour may solve a leveling problem, when floors are significantly out of level, the weight of the slab keeps going up and up as more and more material needs to be poured into the low spots. The extreme thickness of such slabs exacerbates the dead load issues. Their high mass makes accurate temperature control difficult at best. Moisture released from such pours, done in enclosed spaces, brings up the specter of mold and mildew.

Mike Tabacco, the project contractor, cited virtually all of these issues as reasons to specify Warmboard. The leveling issues were solved with sleepers on top of the existing floor structure shimmed to produce a level substructure to which the Warmboard was directly nailed. Warmboard’s compatibility with a variety of floor coverings, especially the beautiful nailed and finished in place Doug Fir flooring contributed to the elegance of this showplace.

But Warmboard provided more benefits that merely solving the leveling, floor height, flooring installation and other construction detailing issues. Warmboard’s high conductivity allows the kind of low water supply temperatures that can wring the greatest efficiency out of a geothermal heat pump system extracting heat from an aquifer, as is the case here. The CTA building was also able to use water from that aquifer for radiant cooling, which was made possible in part because of the dry Montana summer climate. The fast response of a low mass system enhanced energy efficiency as well.

The architects and other staff experience the quiet, invisible comfort of a year round, “just right” thermal environment. The radiant system enhanced the project precisely because it did not intrude in, nor limit CTA’s vision for their offices.